The Hollow man who is Australia’s ‘…Prime Minister has issued a stern warning to Australians about tensions in the Middle East after a woman was arrested for allegedly burning the Israeli flag during protests in Sydney.

Police allege the woman was spotted walking down a busy street while carrying a burning flag after officers were alerted to an unauthorised protest involving about 200 people on The Boulevarde in Lakemba on Tuesday night.

It comes as violence flared between Israel and Palestine, with the death toll rising.

The woman was allegedly seen waving the flag as she walked down the street.

Prime Minister Scott Morrison has urged people not to “import” the Middle East conflict into Australia.

“Of course, we’re all very concerned for what’s happening there,” he told 2GB radio on Thursday.

“We’ve been urging restraint from all parties involved there to not take any unilateral action on those very stressful and tense situations that we’re finding there.

“But those things should not be played out here in Australia. We’re a peaceful country, we believe in a two-state solution … we want to ensure that people live in this country with tolerance and respect.

“We do not want to import the troubles of other parts of the world into this country.”

Police intervened as the woman walked down the street.

Police said officers were conducting patrols during Ramadan when they became aware of the protest, then liaised with the organiser to “assist with the safe facilitation of the demonstration”.

“About 9.30pm, police observed a woman walking down the street through traffic and holding an Israeli flag that was on fire,” police said in a statement.

“The flag was removed from her possession and as it was being extinguished, the woman ran from police.

“She was detained a short time later and was spoken to by police before being issued a move-on direction.

“A large crowd had gathered but remained compliant and dispersed a short time later.”

The 48-year-old woman has been issued with a court attendance notice for allegedly behaving in an offensive manner in a public place and wilfully preventing free passage of person or vehicle.

She is scheduled to face Bankstown Local Court on July 8.’https://www.news.com.au/national/politics/prime-minister-scott-morrisons-stern-warning-to-australians-over-conflict-between-israel-and-palestine/news-story/300eb5486c310bc82b9f2f1257c803da

Lakemba is a Muslim Sydney hotspot and those who live there are sometimes above the law. If this woman gets more than a slap on the wrist it will be surprising.

If a Biden/Harris administration is inaugurated in January, 2021 there will be Obama changes in all areas including Israel and its enemies. For example, ‘A Palestinian-American who has been characterized as a terrorist sympathizer has been appointed as Chief of Staff for the White House Office of Legislative Affairs.

In 2002, Reema Dodin described Palestinian suicide bombings as “the last resort of a desperate people,” during a public presentation in Lodi, CA, according to the Lodi News-Sentinel.

“The American public has a history of being a fair-minded people, but the information the public is getting is biased, awful and wrong. If you’re going to present this information to the public, you need to do it in a holistic manner,” said Dodin.

The presentation was conducted during the Second Intifada, which was the second Palestinian uprising against Israel.

The uprising lasted from 2000 to 2005 and resulted in 741 Israeli civilian deaths, according to The Israeli Information Center for Human Rights.

The year prior, Dodin participated in a demonstration at her alma mater UC Berkeley that compared Israel to an apartheid state and called for Berkeley to dispossess Israel, according to the Berkeley Daily Planet.

“She is the daughter of Palestine and her origins are Palestinian,” Dodin’s uncle, Ahmed Dodin told Anadolu Agency.

Ahmed expressed hopes that the appointment “will be good for her and her mother country.”

“Reema is the first to tell you she has grown from her youth in her approach to pushing for change, but her core values of fighting to expand opportunity to building a stronger middle class remain her driving force,” said the Biden-Harris transition team to The Jerusalem Post.’https://www.foreigndesknews.com/politics/biden-taps-terrorist-sympathizer-as-incoming-staffer/

If Biden Wins, So Does Hamas & Iran

Biden hasn’t been declared the winner yet of the 2020 Presidential election but Hamas has congratulated him already as has most of the world leaders. You see, under sleepy Joe Iran and the Palestinians are winners and Americans and other freedom loving people are the losers! Some may say, ‘Oh, well, there is another election in four years’. That is true but will it be a fair one or another just like this one?

If this election isn’t scrutinized and sanitized with a watchful and truthful recount of only legal votes then there is no hope for a future fair election for the President of the united States.

However, in spite of the shenanigans of this election the terrorist ”Palestinian Authority and Hamas leaders welcomed the news of Democratic challenger Joe Biden’s victory in the presidential elections.

PA President Mahmoud Abbas said, “I look forward to working with President-elect Biden and his government to strengthen Palestinian-American relations and achieve freedom and independence, justice and dignity for our people, as well as to work for peace, stability and security for all in our region and the world.”

From the PA’s perspective, the Trump administration was the worst it has encountered. The PA cut ties with the administration when the U.S. recognized Jerusalem as Israel’s capital in December 2017.

The Trump administration reversed decades of U.S. policy, which had put the onus for a failure to reach a peace agreement on Israel while ignoring Palestinian intransigence. Under President Donald Trump, the U.S. held the PA responsible, cutting off its funding for its continued support of terror.

“Nothing was worse than Trump’s era, his departure is a gain,” Senior PLO official Nabil Shaath said.

Ismail Haniyeh, leader of the Hamas terrorist group, which rules the Gaza Strip, said: “U.S. President Donald Trump, who sought to obliterate Palestine’s cause, has gone and Jerusalem will not go.”

“The Trump administration was the most extreme in its support for Israel at the expense of Palestinian rights. We call on President-elect Joe Biden to make a historic correction to the discriminatory American policy toward the Palestinian people that has caused instability in the region and the world,” Haniyeh added.

The PA appears to want to forget the Trump administration as if it were a bad dream. According to Israel Hayom, a senior official with Abbas said that the PA wants to resume negotiations where they left off when President Barack Obama departed the White House in 2016.

The official also said Abbas wants the U.S. to return its embassy to Tel Aviv. Trump moved the embassy to Israel’s capital two years ago. Biden said during the campaign that he wouldn’t move the embassy back even though he opposed the embassy’s transfer to Jerusalem.’https://worldisraelnews.com/plo-hamas-praise-biden-win-condemn-trump/

‘Palestine is etched on the heart of the fetus, A proud Martyr in his mother’s womb’ so goes the song!

SEND A PALESTIAN CHILD TO CAMP

“On July 16, 2016, Hamas’s military wing, the ‘Izz Al-Din Al-Qassam Brigades, launched its annual “Pioneers of Liberation” summer camps in Gaza. This year’s camps were dedicated to the “Al-Quds Intifada” (i.e., Jerusalem Intifada), which is the Palestinian name for the wave of attacks against Israelis, especially in Jerusalem, in the past few months. The camps lasted two weeks and were attended by some 30,000 children and youths; activities included firearms training and other military training, civil defense exercises, and lessons in religion and in battle heritage. According to ‘Izz Al-Din Al-Qassam officials, “the goal of the camps is to stoke the embers of jihad among the generation of liberation, to inculcate Islamic values and to prepare the army of victory for liberating Palestine.”[1]

The camp activities were documented on special social media accounts and under dedicated hashtags such as #Pioneers-of-Liberation. These accounts feature numerous posts and photos; the faces of the camp organizers and counselors, all of them Al-Qassam fighters, are often blurred to prevent recognition.” http://www.memri.org/report/en/0/0/0/0/0/0/9374.htm

Some of the neat  things the “children” get to learn is how to sneak up on a victim and stab him/her. O’ What fun! Especially if they are a Jew!

Then there is learning how to handle a gun. Yes, in Gaza even the young may have a gun! Obama, Hillary and their like do not have a problem with this. Here the young boy can learn how to become proficient in firing his weapon and someday perhaps, he will even get a chance to shoot Benjamin Netanyahu himself. 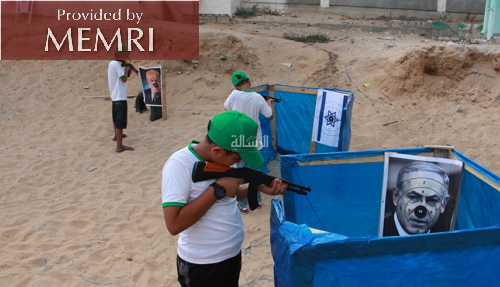 Yes, the Palestinian children NEED YOUR HELP so they may enjoy a time at summer camp. If you can find it within yourself to give, whatever amount you can, these dear children will be ever so grateful. Just send your gift to 1600 Pennsylvania Avenue and make your check out to Palestinian Youth Camp. Thank you!

Have you seen or read about these camps on CNN or in any of the major newspapers? Probably not!

Behind the Scenes: Palestinian Demonstrations

To whom does Jerusalem belong? Not a hard question to answer if you know your Bible.

With the world seemingly pandering to a people who are not a people against Israel it is interesting to see what America’s young university students know. Watch and weep!