Isn’t it wonderful that ‘Sweden has the first feminist government in the world. This means that gender equality is central to the Government’s priorities – in decision-making

and resource allocation. A feminist government ensures that a gender equality perspective is brought into policy-making on a broad front, both nationally and internationally. Women and men must have the same power to shape society and their own lives. This is a human right and a matter of democracy and justice. Gender equality is also part of the solution to society’s challenges and a matter of course in a modern welfare state – for justice and economic development. The Government’s most important tool for implementing feminist policy is gender mainstreaming, of which gender-responsive budgeting is an important component.’ http://www.government.se/government-policy/a-feminist-government/

Yet, ‘…Sweden’s self-declared “first feminist government in the world”sacrificed its principles and betrayed the rights of Iranian women as Trade Minister Ann Linde and other female members walked before Iranian President Rouhani on Saturday wearing Hijabs, Chadors, and long coats, in deference to Iran’s oppressive and unjust modesty laws 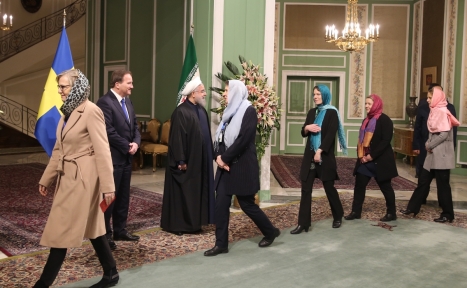 which make the Hijab compulsory — despite Stockholm’s promise to promote “a gender equality perspective” internationally, and to adopt a “feminist foreign policy” in which “equality between women and men is a fundamental aim.”

In doing so, Sweden’s female leaders ignored the recent appeal by Iranian women’s right activist Masih Alinejad who urgedEuropeans female politicians “to stand for their own dignity” and to refuse to kowtow to the compulsory Hijab while visiting Iran.’

‘The scene in Tehran on Saturday was also a sharp contrast to Deputy Prime Minister Isabella Lövin’s feminist stance against U.S. President Donald Trump, in a viral tweet and then in a Guardian op-ed last week, in which she wrote that “the world need strong leadership for women’s rights.”’ https://www.unwatch.org/walk-shame-swedens-first-feminist-government-don-hijabs-iran/

What is it with Western leaders and their hypocrisy? The Swedish female leaders can tweet hatful vile venom against President Trump but then turn around and submit to Iranian Islamic law!?  Is this for real or is it a scenario staged for a chapter in some psychological text book? Where is the outrage of the other feminists of the West when something like this occurs? HYPOCRISY at the highest level!!!

What is this with Sweden? Have they not learned anything yet?