Was Hitler a MONSTER? Well, if he was what are those promoting the abortion industry?

Murdering babies is set in concrete as ‘Minnesota and Illinois are the only states in the upper Midwest that where abortion rights are solid in their constitutional law, and would see no change to abortion access should the ruling be overturned. A federal law falling will not change anything in either state.

However, Minnesota is preparing for an Influx of people coming to the state for reproductive care.

Attorney General Keith Ellison, the president of the upper Midwest region of Planned Parenthood, and a law professor from Mitchell Hamline all spoke Tuesday morning about the state’s plans.

Sarah Stoesz, the regional president of Planned Parenthood, said they are increasing staff and their physical footprint right now to prepare for more patients coming from other states for abortions. She says they’ve already stopped abortions appointments in South Dakota, which has a trigger law in place, which means there’s an automatic state abortion ban that goes into place if the federal right is overturned.’https://www.cbsnews.com/minnesota/news/no-one-will-be-prosecuted-ag-ellison-says-abortion-rights-are-protected-in-minnesota/

Only in California? No!

‘In a time when Los Angeles County is experiencing skyrocketing crime, homelessness, and brazen theft, their county supervisors have been considering firing thousands of highly trained peace officers, for not taking the disputed COVID jabs.

Yes even though homicides in Los Angeles County have increased 94% over the last two years, the edicts coming down from their politicians must be complied with or county employees could face termination.

Their plans to fire the huge number of officers, when The Los Angeles Police Department has 296 empty officer positions and almost 500 fewer officers on duty than it did this time last year, will only exasperate the county’s problems.

The shortage is due to budget cuts, challenges of the pandemic, and massive retirements following the lack of support during and following the 2020 rioting in response to the death of George Floyd while in police custody.

BLM and ANTIFA took advantage of the situation sending thousands of their activists to the streets to call for reform while demanding the defunding of police departments. Progressive city councils in the U.S., including Minneapolis, MN, have significantly defunded their police while trying to move to community-based alternatives.’ For more of this progressive woke story go to https://ericthompsonshow.com/2022/02/09/woke-los-angles-county-supervisors-vote-for-more-lawlessness/?utm_source=newsletter&utm_medium=email&utm_campaign=EricThompson

Was Police Officer Derek Chauvin ever going to get an unbiased fair trial? Consider, what is a fair trial? ‘In the U.S., the right to a fair trial is secured by the Fourteenth Amendment as a fundamental liberty. A fair trial is a legal trial conducted according to the rules of common law. In a fair trial, the accused’s legal rights are safeguarded and respected. A fair trial hears before it condemns. The trial proceeds on inquiry and renders judgment only after trial. In a fair trial, jurors are to be entirely indifferent as to the parties at the outset. The necessary elements of a fair trial are an adequate hearing and an impartial tribunal, free from any interest, bias, or prejudice. A fair trial presupposes full justice within human limitations. [Box v. State, 74 Ark. App. 82, 88-89 (Ark. Ct. App. 2001)].’https://definitions.uslegal.com/f/fair-trial/

When Fake President Biden, Out of the Swamp Waters and other Leftists spewed forth their vitirol hatred Pre-Trial was it ever going to be FAIR?

‘Everything about the Chauvin trial and the media coverage of it showcases the subversion and transformation of our justice system into one of a third-world banana republic.

We can’t have a justice system that is ruled by threats of violence, doxxing, and harassment from the domestic terrorists in the mainstream media, on the streets, and in the Democratic party.

If you are caught in the censored echo chambers of Big Tech platforms, chances are you missed most of the stories I’ve gathered below. If you are trapped inside the Big Media echo chambers, you’ve been spoon-fed what the oligarchs want you to see and hear about the trial.

That’s why I’ve taken the time to curate a collection of stories for you so you can save them and never forget how this all played out.

Police departments across US brace for Derek Chauvin verdict

Steve Scalise: ‘I Was Shot’ Because of the Kind of ‘Dangerous Rhetoric’ Repeated by Maxine Waters

Facebook Preparing to Censor Posts Ahead of Chauvin Trial Verdict

Compare what is happening in our streets right now and what is being said by our “leaders” to what happened with peaceful protestors at the Capitol on January 6th. Compare the media coverage and the reaction to it. Compare how the Officer who shot and killed Ashli Babbitt was treated by both the media and our “justice system.”

We still don’t even know his name!

Half of the country lives in reality and the other half lives in a bubble world of fear and loathing handcrafted by the oligarch elites. One side plays by one set of rules, the other plays by no rules at all.

This is a serious problem and it’s not getting better anytime soon. Our nation needs prayer and we as individuals must cling to the hope, peace, and Biblical justice of the Holy Spirit.

“Conservative” courts and judges mean nothing if our justice system is ruled by a mob of domestic terrorists. The rule of law means nothing if there are one set of rules for half of the country and a different set of rules for the other. Nothing about what we are seeing unfold right now is “justice” in any sense of the word and it certainly is not “normal.”

After the death of George Floyd, the riots and the call for defunding the police what sane person would desire to walk the beat in Minneapolis?! So it isn’t any real surprise that ‘Amid a sharp rise of violent crime incidents in the city of Minneapolis, council members held a meeting on Tuesday after Police Chief Medaria Arradondo plead for assistance from outside police forces to help with their shortage in staff.

“Resources are hemorrhaging. Our city is bleeding at this moment. I’m trying to do all I can to stop that bleeding,” Minneapolis Chief Arradondo said, the Minneapolis Star Tribune reported.

Minneapolis residents also urged city leaders to find a strategy to reduce violent crime incidents in the city as the statistics are showing the highest numbers in at least 15 years, with 74 people dead and about 500 wounded by gunfire in 2020.

The staff shortage in the force comes after dozens of officers have left the department. Officials voted to cut the department’s budget by $1 million earlier this year and also threatened to dismantle the entire force and replace it.

Minneapolis had 874 police officers before the city cut its budget. That number is now down to 834, with 121 on leave, police spokesman John Elder said, according to the Star Tribune.

“We’re barely able to cover the shifts that we have,” City Council Member Linea Palmisano said.

Following the police custody death of George Floyd in late May, city leaders pushed to defund and reform the force, but now the city’s violent crime reports are soaring. Besides gun violence, carjackings, aggravated assault, and other high-profile crimes all increased compared to last year’s figures.

In 2019, Minneapolis reported 48 homicides, that number has already increased to 74 so far this year, statistics not seen in over a decade, and it is continuing to rise.

Arradondo asked the city council to bring in between 20 and 40 Metro Transit Police and personnel from the Hennepin County Sheriff’s Office, the Star Tribune reported.

The police chief requested a total of $500,000 in additional funds to enforce the department. His request was passed on Tuesday by the council with just a narrow margin.

During the meeting, which was held virtually, some members of the city council didn’t agree with the chief’s pleas and pushed back his request, questioning the effectiveness of increasing its resources.’https://www.theepochtimes.com/minneapolis-police-chief-pleads-for-outside-help-to-fight-violent-crime-surge_3577865.html?utm_source=newsnoe&utm_medium=email&utm_campaign=breaking-2020-11-13-4

Will Being Woke Save Target

Target must have not learned much from the Minneapolis riots. Rather than being sensible Target has gone completely WOKE! The looters that completely destroyed the South Minneapolis Target store ‘…is reopening, Bloomberg reported — but with a focus on serving the needs of black customers.

What are the details?

The interior of the store was overhauled, the outlet said, with the pharmacy moved to the front of the store so elderly customers can easily get their prescriptions and the grocery stocked with spices requested by the local community while the lighting for the crosswalk from the nearby rail station was upgraded, and the entrance was made more inviting with a new mural and plants.

Bloomberg noted that Target is a retailer long associated with white suburban shoppers — and executives said the overhaul is part of an effort to improve its image with black customers. Indeed, the outlet said the Minneapolis store drew shoppers from areas twice as black as a typical Target, according to cellphone data tracked by SafeGraph.

“By being based in Minneapolis — by being based in the eye of the storm of George Floyd — they had a huge responsibility to produce a pretty elaborate plan,” Anthony Thompson, a professor of clinical law and a founding faculty director of the Center on Race, Inequality and the Law at New York University, told Bloomberg of Target’s decision to raze and reconstruct the store.

More from the outlet:

It’s not exactly clear why this specific store was targeted; protesters originally headed there for milk to relieve the pain from being tear gassed. But in rebuilding, Target realized the surrounding neighborhood had never been asked point-blank whether the store that’s been there since 1976 was serving it well. It wasn’t.

The litany of complaints was long. And even though a remodel in 2018 fixed earlier perceptions the store was dirty, poorly stocked and a bit of an afterthought, some White residents in the Longfellow neighborhood would still drive to a different Target instead, derogatorily referring to the location — and its customers — as “Tar-ghetto.”

So the roughly $80 billion corporation did something it hadn’t before: met with Black residents, employees and community organizers (over Zoom; it’s 2020 after all) to ask what they wanted to see in the reconstructed store.

Target hired a contracting company owned by a Somali-American woman and built some of those neighborhood requests into its blueprints. It also added shutters to the store that can come down in case of future emergencies.

Bloomberg added that Target laid out the goals of its new racial justice committee in August, including the need to “create environments where Black guests feel overtly welcome,” which implied many didn’t.

Kiera Fernandez, the corporation’s chief diversity and inclusion officer and vice president of human resources, acknowledged to the outlet that Target does have a reputation of catering to white shoppers — but that it’s working on building more relationships with black entrepreneurs by stocking their products. But Bloomberg noted that Target hasn’t committed to signing the 15% Pledge, a promise to fill shelves with that percentage of products made by black-owned brands.’https://www.theblaze.com/news/target-reopening-looted-ransacked-minneapolis-store-with-emphasis-on-serving-black-customers?utm_source=theblaze-dailyPM&utm_medium=email&utm_campaign=Daily-Newsletter__PM%202020-11-12&utm_term=ACTIVE%20LIST%20-%20TheBlaze%20Daily%20PM

Believe it because someone who visited the Star Tribune’s offices ‘…took a picture of a painting of Ilhan Omar hanging on wall at the Minneapolis newspaper headquarters. 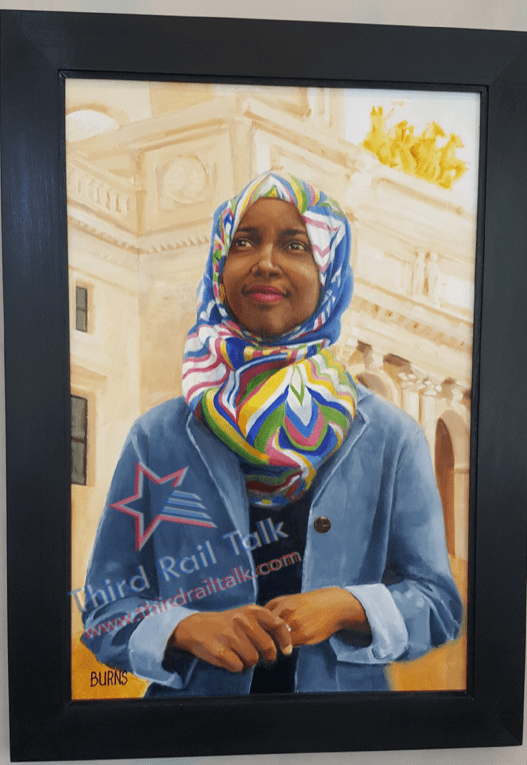 Next to the portrait there is a framed biography of Omar, a dramatic retelling of her journey from a refugee camp to Minnesota politics.

Few words on Omar’s greatest legislative achievements in the Minnesota House since she was elected in 2016: opposing a ban on insurance payments to suicide terrorists and opposing a ban on Female Genital Mutilation. That’s right, Ilhan Omar wants US insurance companies to pay out life insurance policies to jihadists who get killed while waging jihad overseas against the United States and our allies. She’s also against banning Female Genital Mutilation – a barbaric Islamic practice of maiming young girls by cutting off their clitoris.’ https://thirdrailtalk.com/ilhan-omar-painting-proves-huge-star-tribune-bias/

What is sad is that there are people who vote for people such as Hillary and Omar! One way to continue to Make America Great Again is NOT to vote for these Democrat, Islamist open borders type of people.