This is the Christian testimony of Chicago gang memeber Sampson Green.

Mark 2:17 When Jesus heard it, he saith unto them, They that are whole have no need of the physician, but they that are sick: I came not to call the righteous, but sinners to repentance.

This video is based on the Pacific Garden Mission’s radio program Unshackled. This story is about Georgia who as a child was abused and failed terribly to thrive as an adult. She turned to crime but was caught and spent time in jail. Upon her release she learns a lesson that redirected her to the true path of freedom found only in the Lord Jesus Christ. I trust you have found that same freedom.

John 8:36 If the Son therefore shall make you free, ye shall be free indeed.

Romans 10:9-11 That if thou shalt confess with thy mouth the Lord Jesus, and shalt believe in thine heart that God hath raised him from the dead, thou shalt be saved. 10 For with the heart man believeth unto righteousness; and with the mouth confession is made unto salvation. 11 For the scripture saith, Whosoever believeth on him shall not be ashamed.

God Forgives Anyone Who Calls Upon Him, Even Murderers 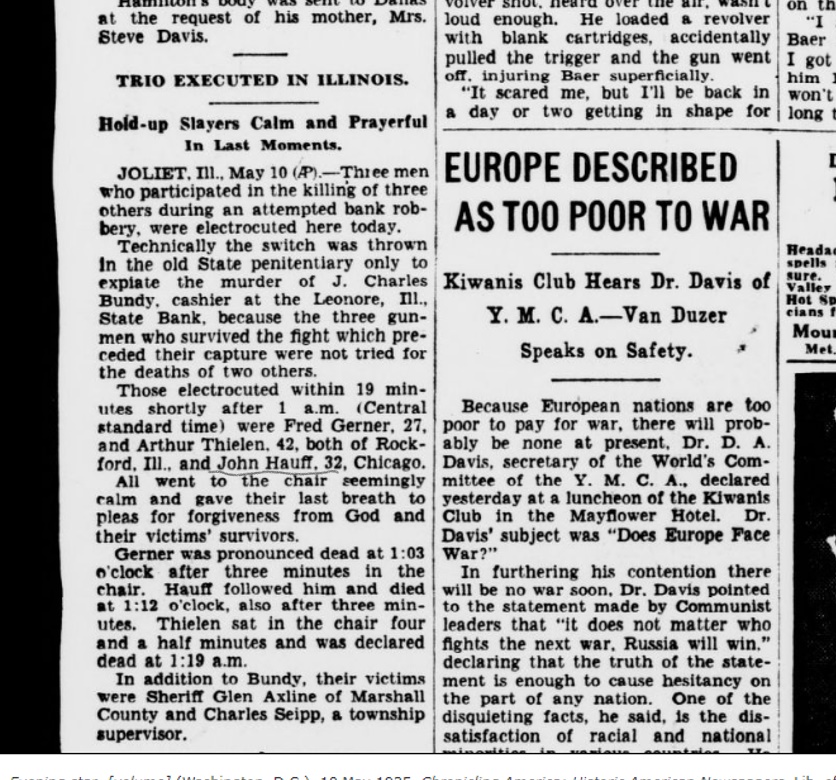 From the Clayton County Register 24 January, 1935

‘Clayton Co. Treasurer’s Office Robbery
The unsuccessful attempt to rob the county treasurer’s safe here a week ago last Friday has been cleared up by the confession of three men captured in an attempted bank robbery at Ottawa, Ill., last week Wednesday. A fourth member, included in the confession of the three men, is dead as the result of a running gun battle after the yeggs (a slang term used in reference to safecrackers/robbers in the early 1900s) were discovered in the Leonore, Ill., bank.

The dead member of the gang is Melvin Liest, 40, of Rockford, Ill., for four years a member of the Dubuque fire department. In a hospital in LaSalle, Ill., Arthur Thielen, 41, a former Dubuque taxicab driver, lies dangerously wounded, a bullet in his abdomen. In the LaSalle county jail are Fred Gerner of Rockford, Ill., formerly a resident of Clayton; and a brother-in-law of Thielen. With him also is John Hauff, who claims to be from Chicago. The latter is the one who first confessed implicating the others in the attempted robbery here. After his confession had been gotten the others admitted their guilt.

Hauff’s confession gave a clear account of the time spent here in Elkader and vicinity from the time they arrived until they left after their unsuccessful attempt to loot the treasurer’s safe. According to his story in the LaSalle county jail last Sunday, the gang arrived here Wednesday afternoon, January 9th. They came to Elkader via Prairie du Chien and the Marquette bridge avoiding Dubuque because Liest was known there.

They spent Wednesday afternoon here in town and since the attempted robbery a number of people reported to authorities that an out-of-state car was observed on the streets. While the car was parked on lower Front street near the Niemeyer Bros. store, Liest spent about an hour in the court house, getting the lay of the land, according to Hauff. While Norbert Niemeyer took no particular pains to observe the number of the license plates he felt certain the number was Wisconsin “77-070.” A check on the plates last Sunday revealed that he had not been far off for the number was “77-080.” Both the car and the plates were stolen, county officials have found.

The group ate their supper Wednesday night in the Riverside Café and that evening attended the show in the Rivola theatre where they signed fictitious names on the bank night record in the presence of Donna and Kathleen Dinan. They claim to have spent the night in their car but evidence points to the fact that they spent, at least part of the time, in the Pony Hollow school house just south of town. There is evidence that a fire had been started in the stove and the rope from the flag pole and bell were taken by the gang to use in getting out their car which had been stuck. Their story admits that they broke into the school house.

Thursday morning they claimed to have eaten breakfast in Garnavillo. Thursday night they admit breaking into the court house about nine o’clock, and it was not until after they had broken into the vault that they went to get the torch and gas tanks from the county garage. Hauff stated that he kept guard at the west entrance of the court house while Thielen guarded the east entrance. Gerner and Liest continued the job in the vault.

Just about the time the gas pressure in the tanks began to give out, Liest suffered an attack from the gas. He walked from the vault into the main hall and there fell over in a faint. His pals carried him into the air and after he recovered he wanted to return to finish the job. His pals, however, resisted and they left immediately along the same route they had taken when they came to Elkader. From here they finally landed in central Illinois where they attempted the bank robbery at Leonore, which resulted in the death of four men and the serious injury of two others; with one gangster in a hospital and two others in jail.

Besides Liest the dead are: Charles Bundy, 42, cashier of the Leonore State Bank; Glenn Axline, 32, newly elected sheriff of Marshall county, Ill., and Charles Seipp, 50, a director of the bank and a member of the township supervisors. Seipp died last Sunday. Renof Brown, a member of the posse, and Robert Ness, a 16-year-old farm boy were injured in the running gun fight.

Gerner, who is supposed to have suggested the robbery here is a former Clayton county boy. He lived near Clayton and at one time attended the Guttenberg school. February 25, 1925, he was indicted on a charge of larceny by a grand jury in this county. The following month he was sentenced to a term of six months in the county jail. During the time he was serving his sentence he was used as a trusty to drive a truck on road work and also did odd jobs around the court house. His familiarity about the court house and the county garage is what led officials to believe, for a short time, that the gang had had a local contact.

After the reports of the Leonore attempt Sheriff Palas and State Agent Joe Burke felt that there might be a connection between that job and the one attempted here. They followed those clews and Sunday went to Ottawa and LaSalle where they obtained the confessions as already outlined.

Sheriff Palas left here Saturday afternoon with the Misses Donna and Kathleen Dinan for the purpose of identifying any or all members of the gang. The Misses Dinan did identify Gerner and Hauff but were uncertain about Thielen. Since the three are charged with a graver offense in Illinois than they would be here no effort will be made to bring any of the remaining trio to this county for trial.

Several local people have reported that there were five in the car when the gang was in Elkader but the confession of Hauff and the other two implicates only four men. Local officials appreciate the assistance of Sheriff Ralph Desper of Ottawa and the co-operation of Chief of Police Gillis and Sheriff Ryder, both of Dubuque.

The Christian Testimony of Ken O’Dell