‘Many people today do not seem to realize that the same poisonous philosophy (evolutionism) that justified killing under Hitler1 has also infected the American abortion mentality.

According to documents released in February 10, 1992, “Joseph Mengele, the Auschwitz death-camp doctor known as the ‘Angel of Death’ for his experiments on inmates, practiced medicine in Buenos Aires for several years in the 1950s. He ‘had a reputation as a specialist in abortions,’ which were illegal.”2 It should not be surprising that one who extinguished life at Auschwitz would practice a similar grisly crusade on life in the womb.

Carl Sagan encouraged the fiction that life in the womb traces an evolutionary history. We “must decide,” he wrote, “what distinguishes a human being from other animals and when, during gestation, the uniquely human qualities—whatever they are—emerge.”3 He compared the appearance of the developing embryo to “a segmented worm” and added that “something like the gill arches of a fish or an amphibian…become conspicuous, and there is a pronounced tail.” The face becomes “reptilian… (then) somewhat pig-like.” Eventually, it “resembles a primate’s but is still not quite human.”

In the article, evolutionary thinking offered yet again “justification” for extinguishing life thought to be subhuman. This, of course, is pseudo-science and nonsense. The science of genetics has confirmed that the embryo is identifiably human from the moment of conception.

Another insidious development occurred earlier in the century (about the time Hitler himself was forming his ideas). It involved Margaret Sanger (1879–1966), the founder of Planned Parenthood (a major promoter of abortions in America today). She has been given the unusual title, “Father of Modern Society.”4 Her evolutionary mentality will be documented below, but first there should be a consideration of her views relating to abortion.

In her Woman and the New Race, Sanger offered a conflicting message about this issue. On the one hand she wrote, “I assert that the hundreds of thousands of abortions performed in America each year are a disgrace to civilization.”5 Pro-lifers would heartily agree! She even referred to “babies” in the womb—not using the now “politically correct” term, fetuses: “There will be no killing of babies in the womb by abortion.”5

Her message was inconsistent, however. Not only did Linda Gordon, author of Woman’s Body, Woman’s Right—a major work dealing with the history of birth control in America—indicate that Margaret Sanger “defended women’s rights to abortion,”6 Sanger herself, in the very volume denouncing abortion already cited, wrote, “The most merciful thing that the large family does to one of its infant members is to kill it.”5 This hardly sounds pro-life.

Whatever may be said of Sanger’s confused views, her legacy is an organization that certainly encourages and participates in the killing of thousands and even millions of, to use her phrase, America’s “infant members.” What was it about her philosophy that allowed for this?

Hitler’s link to evolution has already been documented.1 He put survival-of-the-fittest into action, and millions of “unfit” people died as a result. Many Americans believe that something comparable to what happened under the leadership of Hitler is happening now in America. “Babies in the womb,” most of them healthy and fit, have been slaughtered by the tens of millions in the United States of America—1.21 million in 2008 alone!11

What some may not realize is that the same poisonous philosophy that infected Hitler also influenced Margaret Sanger. She said Charles Darwin observed “that we do not permit helpless human beings to die off, but we create philanthropies and charities, build asylums and hospitals and keep the medical profession busy preserving those who could not otherwise survive.” Her view was that such philanthropies and charities were “ameliorative” at best, and that some so-called benevolences were “positively injurious to the community and the future of the race.”

Her following words (content-wise) sound like they could have been spoken by Adolf Hitler himself: “The most serious charge that can be brought against modern ‘benevolence’ is that it encourages the perpetuation of defectives, delinquents and dependents. These are the most dangerous elements in the world community, the most devastating curse on human progress and expression.”

One wonders how far Sanger would like to have taken her eugenics. She reported a study of the United States Army and concluded that “nearly half—47.3 percent—of the population had the mentality of twelve-year-old children or less—in other words, that they were morons.”7 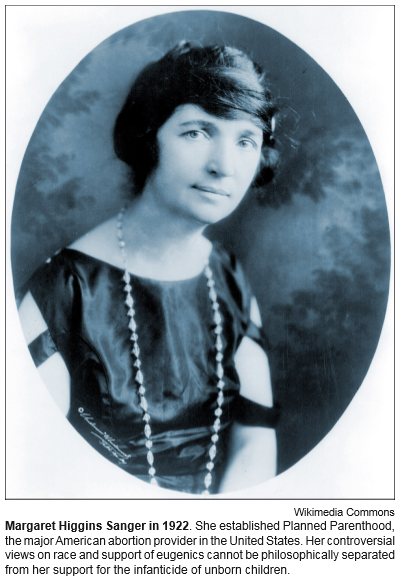 On the racial dimension, Linda Gordon (cf. above) quotes from a letter written by Margaret Sanger to Clarence Gamble on October 19, 1939: “We do not want word to go out that we want to exterminate the Negro population and the minister is the man who can straighten out the idea if it ever occurs to any of their more rebellious members.”6 Many years prior, Sanger said, “Whether or not the white races will be ultimately wiped off the face of the earth depends, to my mind, largely upon the conduct and behavior of the white people themselves. (Applause.)”8

Birth control for Sanger was “nothing more or less than the facilitation of the process of weeding out the unfit.” A eugenist, she defined the field as “the attempt to solve the problem from the biological and evolutionary point of view.” She wanted to change things “to the construction and evolution of humanity itself.”8 She advocated applying “a stem and rigid policy of sterilization and segregation to that grade of population whose progeny is already tainted, or whose inheritance is such that objectionable traits may be transmitted to offspring.”9 Revealing pro-choice tendencies, she went on to promote the notion of giving “certain dysgenic groups in our population their choice of segregation or sterilizations.”8 Ms. Sanger assumed “the evolutionary process of man”10 and argued that the “intelligence of a people is of slow evolutional development”5 She hoped for a motherhood that would refuse “to bring forth weaklings.”5 Such a motherhood “withholds the unfit brings forth the fit.”5 She wrote of “woman’s upward struggle”5 and described the “lack of balance between the birth rate of the ‘unfit’ and the ‘fit’” as “the greatest present menace to civilization.”7

Rejection of the Only Solution!

The Lord Jesus Christ sanctified life in the womb by living there Himself for nine months (Is 49:5, cf. Lk 1:35). He also created every womb that was ever made (Jn 1:3). As the promised “seed” of the woman (Gn 3:15), He came to rescue daughters (like those for whom Margaret Sanger expressed concern throughout her writings) from their burdens of pain, suffering, sin, and death. He came to set them free (Jn 9:36), and many women would testify that they have indeed been set free and will be set free even from death.

Margaret Sanger, however, wrote of a different Jesus—“a Jesus who (would) not die upon the cross.”5 In place of the real Jesus who understands suffering intimately, she chose the hollow shell of evolutionary “science.” Sadly, she wrote, “Interest in the vague sentimental fantasies of extra-mundane existence, in pathological or hysterical flights from the realities of our earthiness, will have through atrophy disappeared, for in that dawn men and women will have come to the realization… that here close at hand is our paradise, our everlasting abode, our Heaven and our eternity.”7 But how is Margaret Sanger qualified to make such pronouncements?

Her present bodily “abode” is very undesirable (coffin? charred remains?), but Jesus is alive with a resurrected body in heaven! After He was resurrected, He proclaimed, “I am He that liveth, and was dead; and, behold, I am alive for evermore, Amen; and have the keys of hell and of death” (Rv 1:18, KJV).

Jesus’ teachings about the future, contrary to Margaret Sanger’s preachings, were neither “vague sentimental fantasies” nor “pathological,” and they will never “atrophy.” Heaven and earth may pass—but His words will never pass away (Mt 24:35). He emphatically said, “I am the resurrection, and the life: he that believeth in me, though he were dead, yet shall he live: And whosoever liveth and believeth in me shall never die” (Jn 11:25–26, KJV). 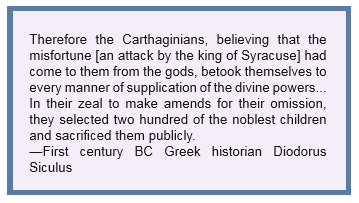 The evolutionary mentality behind abortion is bad science and leads to bad ethics. On the positive side, Margaret Sanger did encourage attention to a very important subject—to what she called “the titanic strength of the sexual instinct.”7 Indirectly, she was affirming the Scriptural truth that “love is strong as death; jealousy is cruel as the grave…Many waters cannot quench love, neither can the floods drown it: if a man would give all the substance of his house for love, it would utterly be condemned” (Sgs 8:6–7, KJV).

She sought to promote birth control. The ultimate need, however, is for Holy Spirit control. The Lord Jesus Christ, after receiving from the Father the promise of the Holy Spirit, shed Him forth upon the earth for the benefit of His followers (Acts 2:33). The only way an unbeliever can experience this loving presence and control is to bow the heart in repentance and faith before the Sovereign Creator-Savior, Jesus Christ.

(This article is an update of one originally published in Impact #27, May 1992, by the Institute for Creation Research, El Cajon, CA. Reprinted by permission of the author.)