Posted by whatyareckon on May 4, 2022
Posted in: Uncategorized. Leave a comment

Free Speech in the West is disappearing fast!

Saint Vincent College in Latrobe, Pennsylvania, has given us yet another disturbing example of modern American colleges’ disdain for free speech.

David Azerrad, a professor at Hillsdale College’s D.C. campus, gave a lecture at Saint Vincent on April 8, “Black Privilege and Racial Hysteria in Contemporary America,” and the speech rubbed Gary Quinlivan the wrong way. Quinlivan is co-director of the program series at the private Catholic college about 40 miles southeast of Pittsburgh, where Azerrad spoke. 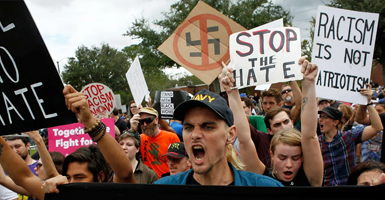 Debate over what types of speech should be allowed on college campuses has become highly contentious, most recently at Saint Vincent College in Latrobe, Pennsylvania. Pictured: Demonstrators gather Oct. 19, 2017, at the site of a planned speech by a white nationalist on the University of Florida’s Gainesville campus. (Photo: Blanco/Getty Images)

In a letter addressed to the school’s students and faculty, Quinlivan accused Azerrad of “minimizing the role of several highly accomplished…