Rep. Comer: FBI Had Its Own ‘Ministry Of Propaganda

Posted by whatyareckon on December 19, 2022
Posted in: Uncategorized. Leave a comment

What’s the difference between the KGB and the FBI?

Rep. James Comer (R-KY) noted Friday on Fox News that the FBI had a task force of 80 agents to moderate social media. 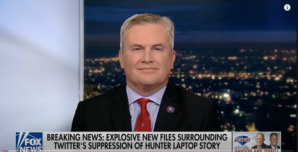 Journalist Matt Taibbi reported on Friday that the FBI exchanged more than 150 emails with former Twitter Head of Trust and Safety Yoel Roth between January 2020 and November 2022. Many of the emails reflect intentional suppression of stories reporting the 2020 Hunter Biden laptop scandal.

Speaking with host Sean Hannity, Comer said: “[T]his is serious and this is going to be a top priority for Republicans on the [House] Oversight Committee.”

He added that he initially only suspected a ”rogue FBI employee or two” and was stunned to discover the FBI used 80 agents to monitor the tweets of American citizens.