Rogue Superpower: China Is Global Pariah, But Shows No Remorse

Posted by whatyareckon on December 7, 2022
Posted in: Uncategorized. Leave a comment

China is being racked by popular protests on a scale not seen since Tiananmen Square in 1989. But how much have the demonstrations made the regime rethink its autocratic ways? So far, the answer seems to be: Not much.

The regime has softened its public rhetoric. For several days now, public officials and the government-controlled media have forgone talk of “dynamic clearing,” the official description of China’s “zero-COVID” policy. Instead, they have emphasized “optimizing” pandemic controls. 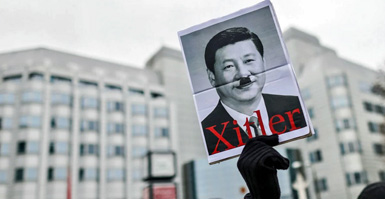 A demonstrator displays a poster with an image of Chinese President Xi Jinping with a Hitler-style mustache added during a protest in front of the Chinese Embassy on Saturday in Berlin. Protests have been occurring in cities across China over the country’s tyrannical “zero-COVID” lockdowns. (Photo: Omer Messinger/Getty Images)

The change in tone signals that President Xi Jinping’s draconian COVID lockdowns may be gradually eased. Local governments are being told to…