Posted by whatyareckon on November 11, 2022
Posted in: Uncategorized. Leave a comment

The Devilcrats cheated in 2020 and are doing it in this election as well!

On Election Day, Cathi Herrod received calls and emails about problems in Arizona’s Maricopa County about voting machines not accepting ballots, ballot tabulators being broken, and other questions regarding paper ballots.

“Voters are skittish in Maricopa County about election integrity,” Herrod, president of the Center for Arizona Policy, a conservative think tank, told The Daily Signal in a phone interview Thursday. “People wonder why it is that Florida is so quick to count votes and it takes Arizona days.” 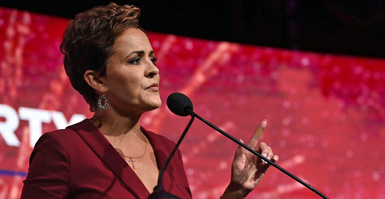 For the second consecutive election cycle, Arizona’s Maricopa County is in the national spotlight for problems during and after the voting. Pictured: Kari Lake, Republican candidate for Arizona governor, speaks during a GOP election night event in Scottsdale, Arizona. (Photo: Joshua Lott/The Washington Post/Getty Images)

For the second consecutive election cycle, Maricopa County is in the national spotlight for problems during and after the voting.