Posted by whatyareckon on June 8, 2022
Posted in: Uncategorized. Leave a comment

Can the blind lead the blind? 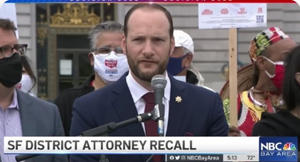 As the former chair of the San Francisco Democratic Party, Mary Jung has a long list of liberal bona fides, including her early days in politics volunteering in Ohio for the presidential campaign of George McGovern…