Posted by whatyareckon on May 13, 2022
Posted in: Uncategorized. Leave a comment

We need a safety bill from these Nutters! 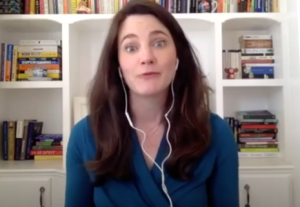 Disinformation Governance Board leader Nina Jankowicz has a history of deriding the very concept of free speech when speaking with political leaders.

Jankowicz called to curtail free speech in the name of protecting women from criticism, according to a transcript of a meeting in the UK to consider the Draft Online Safety Bill. Jankowicz told the Joint Committee on the Draft Online Safety Bill in the United Kingdom in September 2021. Jankowicz suggested that it would be a “useful starting point” for Ofcom (the UK Office of Communications) to punish Big Tech platforms with “fines” for not censoring users enough

She also mocked the very idea of alternate platforms protecting online speech as mere “freedom of expression and fairy dust.” The chair of the hearing, UK Member of Parliament Damian Collins, aligned with Jankowicz in calling for a regulatory crackdown on free speech online. He…