Posted by whatyareckon on September 10, 2020
Posted in: Christianity, Creation. Leave a comment

Genesis 8:17
“Bring forth with thee every living thing that is with thee, of all flesh … that they may breed abundantly in the earth…” 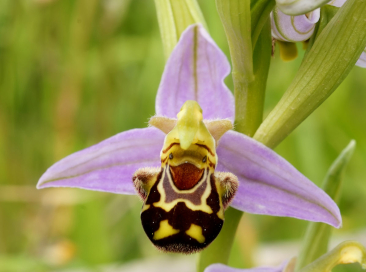 ‘A surprising number of living things mimic other living things. We have done a number of programs on these wonders of God’s creativity. However, evolutionary biologists discount such mimicry as any sort of wonder because in many cases the mimicry is imperfect. The biological term is “flawed mimicry.”

Now evolutionary biologists admit that they may have to revisit their conclusions about flawed mimicry. Several species of orchid are known to mimic pollinators to attract their attention. An orchid called the ophreys orchid seeks to attract the males of several bee species by mimicking the scent of the female of the species. However, when scientists studied the exact composition of the pheromone mix used by the orchid, they found it wasn’t quite the same as that used by the local female bees. So they labeled it flawed mimicry. However, as field scientists expanded their research, they made a surprising discovery. The orchids are able to change the pheromone mix of the scents they create to subtly change the scent they produce. In fact, the orchids were mimicking the scent of female bees some distance away. Why? Further research showed that male bees actually prefer so called out-of-town females to the local females.