THE FBI, THE GESTAPO & THE FOURTH REICH

Much like the Gestapo’s power to render anyone an enemy of the state, the FBI has the 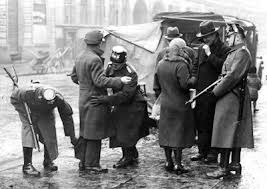 power to label anyone a domestic terrorist.

As part of the government’s so-called ongoing war on terror, the nation’s de facto secret police force has begun using the terms “anti-government,” “extremist” and “terrorist” interchangeably. Moreover, the government continues to add to its growing list of characteristics that can be used to identify an individual (especially anyone who disagrees with the government) as a potential domestic terrorist. For instance, you might be a domestic terrorist in the eyes of the FBI (and its network of snitches) if you:

7 comments on “THE FBI, THE GESTAPO & THE FOURTH REICH”