“Is a church a place of public accommodation and if so – are congregations required to follow anti-discrimination laws regarding gender and sexual orientation?

That’s the issue raised by a brochure published by the Iowa Civil Rights Commission. They contend that any church that opens its doors to the public would be required to comply with sexual orientation and gender identity laws.” http://www.foxnews.com/opinion/2016/07/05/iowa-some-churches-must-comply-with-transgender-bathroom-laws.html

The Iowa Civil Rights Commission “…announced today the publication of its Revised Sexual Orientation & Gender Identity Public Accommodations Brochure.  The revision replaces the previous version which had not been updated since 2008 and clarifies that religious activities by a church are exempt from the Iowa Civil Rights Act.”

They went on to say “‘The Iowa Civil Rights Commission has never considered a complaint against a church or other place of worship on this issue,’ said director Kristin H. Johnson. ‘This statute was amended to add these protected classes (sexual orientation and gender identity) in 2007 and has been in effect since then. The Iowa Civil Rights Commission has not done anything to suggest it would be enforcing these laws against ministers in the pulpit, and there has been no new publication or statement from the ICRC raising the issue. The Commission regrets the confusion caused by the previous publication.’” https://icrc.iowa.gov/pressrelease/iowa-civil-rights-commission-releases-revised-sexual-orientation-gender-identity-public

NOTE they say they have “…never considered a complaint against a church or other place of worship on this issue” but never say never! The Commission then gives a link to the revised brochure; https://icrc.iowa.gov/sites/default/files/publications/2016/2016.sogi_.pa1_.pdf . THERE IS ALWAYS A FIRST TIME!

As Obama, Islamic immigration and Black Lives Matter seek to destroy and divide America, the Iowa Civil Rights Commission is seeking to divide and destroy America through gender “identity”! The pdf states “The new law does require, however, that individuals are permitted to access those restrooms in accordance with their gender identity, rather than their assigned sex at birth. And, just as non-transgender individuals are entitled to use a restroom appropriate to their gender identity without having to provide documentation or respond to invasive requests, transgender individuals must also be allowed to use a gender-identity appropriate restroom without being harassed or questioned.” Note the repeated use of the words “gender identity”.

What type of person sits around in an office thinking up this stuff? GENDER-IDENTITY?! Usually the plumbing a person is born with identifies what gender they are! Oh, but wait that just might mean there is a God Who intended for us to be either male or female!!! We cannot have that as that looks like we are bringing “religion” into the conversation!

As for churches and other places of worship the pdf states “Places of worship (e.g. churches, synagogues, mosques, etc.) are generally exempt from the Iowa law’s prohibition of discrimination, unless the place of worship engages in non-religious activities which are open to the public.” NOTE the word “generally”. So what activity is non-religious when it comes to a Bible believing church? Who will decide?

All this “GENDER-IDENTITY” business will certainly lead to a few courtcases. All Bible believing Christians should be outraged with this and should let their elected state official know it.

Who in their right or left mind would have ever 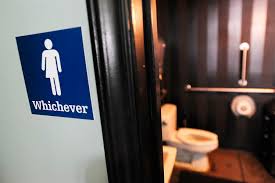 thought this would come to pass? Especially in IOWA!