WHAT HAPPENED IN PARIS WAS NOT BY MUSLIMS! 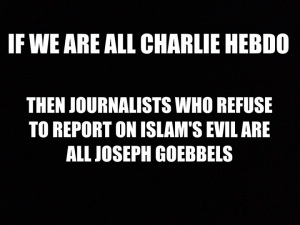 In Australia after the Martin Place siege the tweet “I’ll ride with you” went viral. This tweet was saying the murdering mad man at Martin Place was not a true Muslim. Now, we will hear that these men in Paris too are not true Muslims.

If the murderers of Fort Hood, Martin Place, Charlie Hebdo and the Paris Kosher store massacre are not  true Muslims what are they? The cry “Allahu akbar!” is not a Mormon, Baptist, Catholic, or even an atheist cry. How in the world is a non-Muslim going to detect a true Muslim?

What will now happen? One thing is for sure, more of our freedoms such as speech, travel, etc will be slowly taken away because those who are not true Muslims, according to the media, politicians and imams, will continue killing non-Muslims for insulting the Islamic prophet through cartoons, films etc. Wake up and smell the coffee while you still have a head to smell!